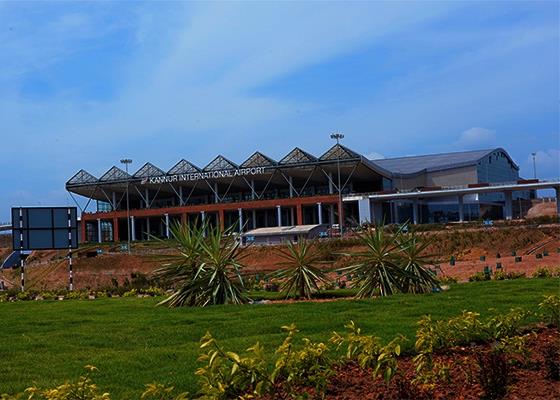 With the opening of Kannur International Airport in Kannur District, the state of Kerala got its fourth international airport.

Soon International flights will start operating from Kannur to the UAE, Oman, Qatar and other middle eastern destinations. The New airport will be convenient and save road travel time for the citizens of Kannur and Kasaragod districts. The airport in future will be connected to Hyderabad, Bengaluru, Delhi and Mumbai. It will eventually operate flights to Bengaluru, Chennai, Goa, Hubbali, Kochi, Thiruvananthapuram and other cities.

Kannur International Airport is located 3 km from Mattanur town in Kannur district, the new airport is spread across 2,330 acres of land.

The 95,000 sq m terminal building is the eighth largest in the country and has been equipped with all the state of the art facilities like self-check in counters and self-baggage dropping machines.

It will also have a 4,000 m runway, the fourth longest in the country.

The airport has come as a boon to the large number of non-resident Keralites from Kannur and Kasargode who now have to travel to either Kozhikode or Mangalore. Tourists headed to Coorg also can use this airport.

Kannur Airport is Owned and operated by a public-private consortium, Kannur International Airport Limited (KIAL). The airport is expected to boost tourism in Kannur, Kasargode, Wayanad and increase inter-state trade in handloom and spices sector.

Kannur, once known as Cannanore, is a beautiful city located in the northern part of Kerala State, India. Kannur, a beach town, is one of the larger cities in Kerala and the administrative headquarters of Kannur district. The district consists of many towns and villages including Thalassery town (called Telicherry during the colonial era), the first heritage town of Kerala due to its historical significance. Kannur, often known as the “crown of Kerala” because of its natural treasures, is bordered by the Western Ghats to the east, Kozhikode and Wayanad districts to the south, Lakshadweep Sea (Laccadive Sea) to the west and Kasaragod in the north. Kannur is popularly known as the city of Looms and Lores because of the loom industry functioning in the district and ritualistic folk dance called Theyyam held in temples. Kannur has a rich culture, history, and traditions that are often connected with many scholars and legends from this region.

It has Green LEED certification as Green Building concept is adopted in the design of the terminal building.

View all posts by justin →